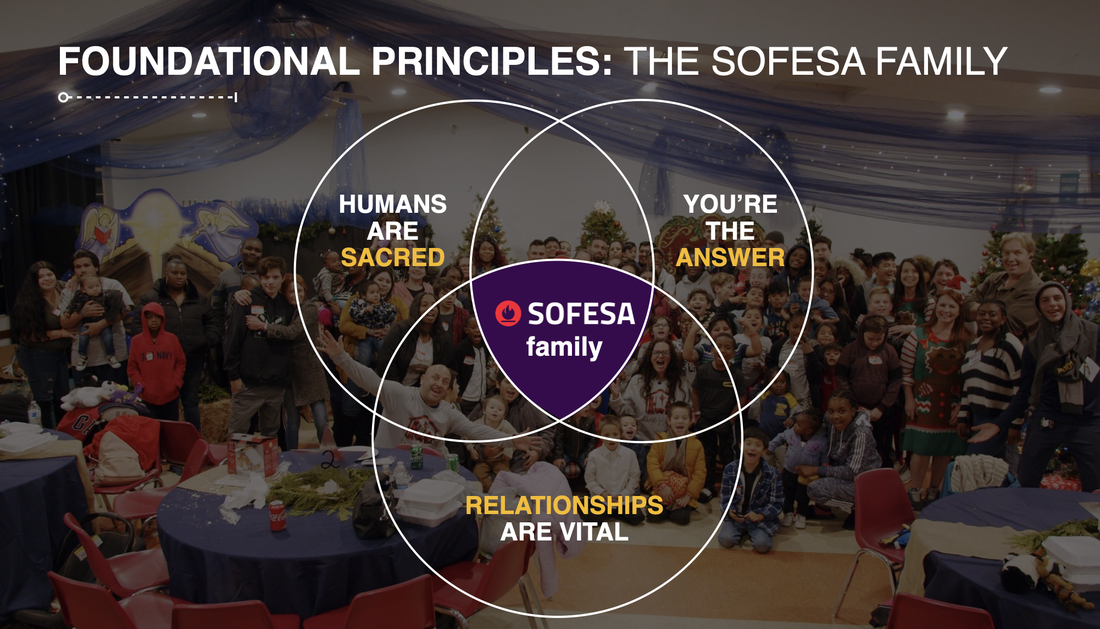 The Principle of Respect for All Human Life, Dignity & Equality

​SOFESA believes that every person is worthy of respect simply by virtue of being a human being. People do not lose the right to being treated with respect because of their race, disability, poverty, age, lack of success or behavior, let alone gain the right to be treated with greater respect because of what they own or accomplish.  SOFESA affirms that all human beings are equal in their dignity and right to life.
SOFESA believes that every person, from the moment of conception to natural death has an inherent dignity and a right to life consistent with the dignity that is ours as human beings. SOFESA  sees the sacredness of human life as part of any moral vision for a just and good society.
Given that every human being is entitled to respect and dignity merely because she/he exists, it follows that there is a radical equality among all human beings.

The Principle of Solidarity

SOFESA believes that the human person is not only sacred, but also social. We cannot consider a person simply as an isolated individual but as part of a rich tapestry of relationships. When making decisions we must consider how that decision impacts that person’s connections with family, friends and the wider community.
SOFESA believes that people have a right to shape their own lives and the society in which they live. They should participate in decision-making processes which impact on their lives and cannot be considered the passive recipients of other people’s decisions. We each have a responsibility to be shapers of the kind of world in which we wish to live.
SOFESA believes in relationships - that we truly are our brothers’ and sisters’ keepers. Learning to practice the virtue of solidarity means learning that ‘loving our neighbor’ is not a feeling of vague compassion or shallow distress but it is a firm and persevering determination to commit oneself to the common good; that is to say, to the good of all and of each individual.

The Principle of Subsidiarity

SOFESA believes that subsidiarity is important in healing homelessness.  Subsidiarity is an organizing principle which dictates issues should be handled by the smallest, lowest or least centralized competent authority. Applying the principle of subsidiarity means to clearly determine the right amount of help or support that is needed to accomplish a task or to meet an obligation: Not “too much” (taking over and doing it for the other: thereby creating learned helplessness or overdependence) and not “too little” (standing back and watching people thrash about, thereby increasing frustration and hopelessness). It might be better summarized as ‘no bigger than necessary, no smaller than appropriate’.
​      SOFESA believes that we are stewards of creation; that everyone of us is responsible for the other. We have a responsibility to care for the world’s goods as stewards and trustees, not primarily, let alone merely, as consumers. As people working toward making these principles a reality, good stewardship also means making careful and responsible decisions with the resources entrusted to us.
SOFESA believes that a community is genuinely healthy when every single person is flourishing. This is not the utilitarian formula of the greatest good for the greatest number, but the moral formula of the greatest good for all simply on the basis that they are human beings and therefore inherently worthy of good things.
SOFESA believes that in a world with deep divisions between rich and poor, powerful and powerless, we must remind ourselves that the most marginalized members of society are at a severe disadvantage. While every person’s needs are important, we must consider first how the lives of the most vulnerable people are impacted or enhanced by the decisions we make as individuals and as a broader community.
Support Us